It’s been a while since I last wrote about testing WebRTC applications. And guess what? There has been some progress. We’re now using Travis-CI for integration tests in combination with Selenium for UI testing.

The usage of Travis-CI has been described quite a while ago by our rtc.io friends. It is now being used by adapter.js which has recently become a dependency of our core modules like getUserMedia and RTCPeerConnection since it shims the differences between browsers and is maintained by people from Google and Mozilla.

What Travis does is run a series of tests on every pull request. Thanks to travis-multirunner this is running the testsuite (located here for adapter.js) in different versions of Chrome and Firefox. If the tests pass and jshint and jscs don’t find any style nits, there is a nice green badge:

Finally, something Daft Punk can be proud of

Among other things we’ve added a few of the features you’ve requested most, such as in-session text chat so you can share links and other information during a call.

The big deal, though, is that we’ve upgraded the entire technology behind Talky so that you can meet with 15 or more people, at once. We’ve been using it regularly at &yet and it’s been great for our weekly full-team hangouts.

This version has been in beta for a few months now and it’s finally ready for prime time. We’ve also released an updated version of the Talky iOS app that works with the new backend technology so you can join a Talky room on the go from your iPhone or iPad.

Get Talky behind your firewall now!

A few weeks ago we talked about the need for private video chat and the challenges involved with making that a reality in a cloud-based environment. That’s why we’ve been working hard to build a version of Talky you can run on your company’s network to keep your voice and video traffic safely away from the public Internet.

We’re proud to announce that Talky On-Premise is now available. 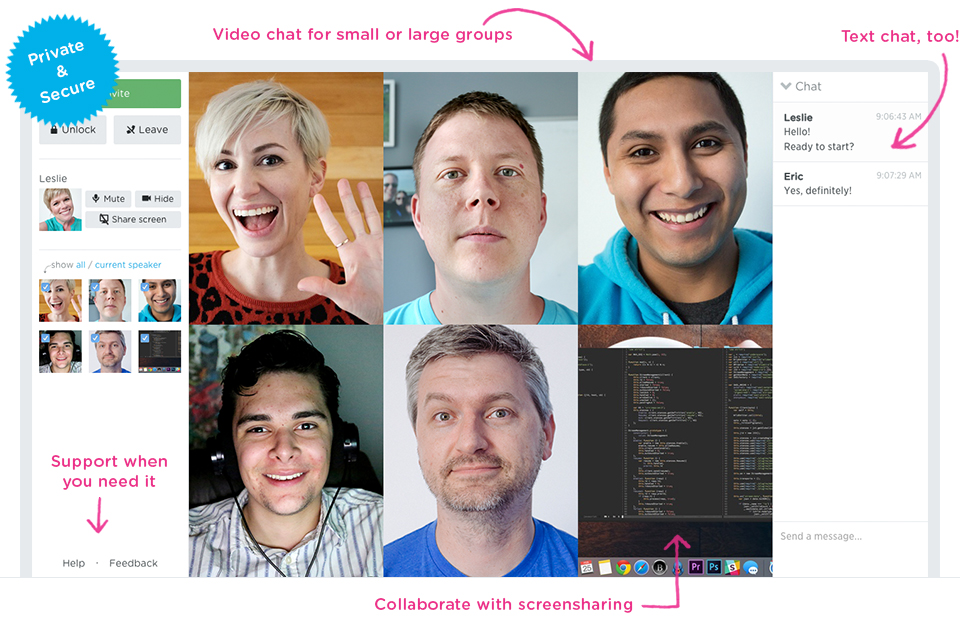 Talky On-Premise takes the same ultra-simple experience you’ve come to love for video chat over the Internet, and moves it in-house. The installation is almost as easy as using Talky in the first place and the price is surprisingly affordable (as we like to say, the only thing astronomical about Talky is the rocket game, Lander).

tl;dr download the Windows 10 preview and test the WebRTC getUserMedia samples in the Microsoft Edge browser!

The WebRTC samples that are made available by Google's WebRTC team on GitHub are a tremendously useful resource for starting with WebRTC. They are so useful that this year my favorite answer on the discuss-webrtc mailing list has been "there is a sample for that".

The samples are grouped into three categories:

One of the greatest lessons we can learn from watching internet platforms and applications grow in popularity is how crucial users' safety can be in utilizing those services. The safety of our Talky users is extremely important to us.

In keeping with discussing the security and privacy of our service, we also want to share our best practices for safety when using Talky. Below are some tips you can use to help ensure that you have great conversations with the people you choose, and avoid stumbling upon explicit, unwanted content.

By default all rooms within Talky are public. When two or more people land on the same link they will be connected with video and audio streaming to each other. Sharing a link to a Talky room via Twitter or Facebook is essentially inviting everyone else. To avoid having an Internet party with strangers, only share links via direct messages or other private methods of communication.

Failing gracefully at this month’s TechTok

As a veteran software developer, messaging and distributed systems have been a passion of Fippo for many years. He is also one of the leading non-Google contributors to the webrtc.org WebRTC library, which is used by Chrome, Opera, Google’s iOS and Android WebRTC SDKs, and others.

This TechTok will focus on Failing gracefully with WebRTC, or everything you need to know about how to handle failures with WebRTC.

Register to attend TechTok here however, if you can’t make it to this event, Tokbox will have a limited number of virtual seats available so tweet at them at @tokbox if you’re interested.

Lead &yet WebRTC engineer Philipp “fippo” Hancke has been very busy recently examining the inner workings of some of your favorite voice and video services. Just a few weeks ago, he wrote up his findings on the popular chat app WhatsApp for webrtcH4cKS. And this week, we have an analysis of Facebooks Messenger service, which recently added videochat.

You can also follow the series of reports at andyet.com/webrtc-reports.

Later this month, he’ll be speaking candidly about more of his discoveries at Twilio’s SIGNAL Conference in San Francisco. In “WebRTC exposed: What we can learn from blackbox exploration of popular voice & video services” fippo explains the findings as well as the lessons that can be learned for WebRTC.

If you’ll be at SIGNAL be sure to ping fippo) or Peter to say hello!

FluentConf talk: WebRTC and ORTC live together in perfect harmony?

Fippo and I gave a talk this week at Fluent covering:

Gar even was able to make a cameo appearance to kick off the talk with an acapella Stevie Wonder and Paul McCartney cover with some twisted lyrics:

WebRTC and ORTC live together in perfect harmony side by side on my laptop keyboard Oh, Lord, hopefully...?

And the WebRTC Platform of the Year Award goes to... Chrome!

I see all these webrtc product of the year awards... And here I am wondering how come Chrome has not won one yet.

User experience is very important to us. Almost a year ago, Chrome changed the way screensharing works in WebRTC in a way that increased the usage for Talky by 300%. Still, the onboarding process for your first screen share was not as nice as it could have been.

It used to be, if you tried to share your screen, you were required to install an extension. Once that extension was installed, you would have to reload Talky before you could share your screen. Until today, it was also necessary to click the "Share Screen" button again after the reload.

Now, after you've installed the extension, you're able to screenshare immediately, making the first-time experience faster and easier.